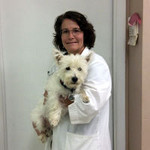 From an early age, Dr. Welch spent much of her time tending to animals. Whether it was injured bunnies, baby birds, or her brother’s hog-nosed snake, she was there for the animal. However, it wasn’t until she volunteered at a veterinary clinic in her hometown of Jacksonville, IL that she realized she had a dream of becoming a veterinarian.

Dr. Welch majored in Biology and minored in Math at Illinois College. She then went on to the University of Illinois College of Veterinary Medicine in Champaign-Urbana. She graduated in May of 1989 with her D.V.M. It was at this time that she met her future husband at the Alton Water Ski Club in 1992.

She and her husband have 2 daughters, Jen and Lindsey. They share in the care of their 2 dogs, Daryll, a lab mix, and Watson, a West Highland white terrier, as well as 1 cat named Corduroy. Dr. Welch has been a veterinarian here since 1995.

In her free time, Dr. Welch enjoys riding her bicycle, hiking, reading, swimming, and completing jigsaw puzzles with her family. She also loves to watch and follow the St. Louis Cardinals.

Ensure Your Pet Receives Top-Quality Care By Bringing It To The Animal Hospital That’s Been In Business Since 1989. 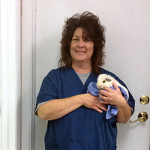 Senta began working at Paw Patch Animal Hospital in April 1999. Originally she started as the receptionist and then became a surgery assistant. Senta currently works as the hospital’s practice manager.

She still lives on the 60-acre farm in Illinois where she was raised. She shares the farm with her husband, Aaron, and her parents. As a child, Senta was always toting home a stray animal, which her parents would usually not let her keep. This may be the explanation as to why she has so many animals now.

Senta and her family share their farm with 3 Pomeranians named Banjo, Stewart and Dudley. Ridge, an Australian cattle dog, and Gemma, an Australian shepherd, also live there. Additionally, the farm has 4 cats named Patches, Bootsie, Raspus, and Scruffy. The family also takes care of Buddy, a Sicilian donkey, and Dixie, a miniature horse.

When Senta is not busy taking care of her animals, she enjoys traveling and spending quality time with her family and friends. 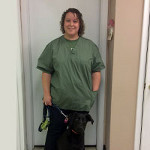 In 2003, Adrienne joined the Paw Patch Animal Hospital team after earning her Bachelor’s degrees in Psychology and Spanish from the University of Missouri-Columbia.

Adrienne has worked her way up to surgery tech and head technician. She currently works on her continuing education, which mainly focuses on prescription diets. Adrienne stays on her toes thanks to her black lab Cricket.

Gary graduated in 1994 from Midwest Institute and has been working in veterinary medicine ever since. He has been with the Paw Patch Animal Hospital team since 1996 and can’t see himself working anywhere else.

Gary shares his home with a dog named Toni, a cat named Spider and a tarantula Named Betty. 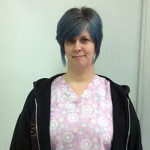 At home, Ranae has a Great Dane mix named Race Car. She loves spending time with her dogs and teaching them tricks. She also has 3 cats, Callie, Ludwig, and Renegade, but Renegade thinks he is a dog. 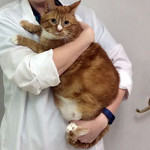 Corduroy was originally Dr. Welch’s kitty but had to come live at Paw Patch Animal Hospital because one her girls is highly allergic to him.

Corduroy is the streak of orange you may or may not see when you come in. He is quite shy and usually takes off when he hears a voice he doesn’t recognize. However, he is a good kitty who will play and even fetch! He likes it here because he receives lots of attention all the time.

Font Resize
Contrast
Accessibility by WAH
Call Us Text Us